If you have not watched Season 8, Episode 3 of Game of Thrones, retreat into your castle and seal yourself in the very safe crypts because this post is one big spoiler.

You did it! You survived the Battle of Winterfell. And man, was it dark. Yes, it was “little girls being liquefied by giants” dark, but it was also just … dark dark. Could barely see a thing. Half of those epic scenes of war ended up looking like a bunch of rats fighting in a shoebox.

Thankfully, the Lord of Light deposited his No. 1 hype girl Melisandre back on Winterfell’s doorstep just in time. In the tense minutes before battle, she provides one of the best visuals of the episode by igniting the arakhs of the Dothraki army, who raise their flaming weapons aloft and … are promptly swallowed up by the Army of the Dead 20 seconds later. When it comes to unsettling battle sounds, the shrieks of dying men and the clang of cold metal against armor are nothing compared to the creeping silence that spread whenever the AotD mowed over a new group of unsuspecting future recruits. 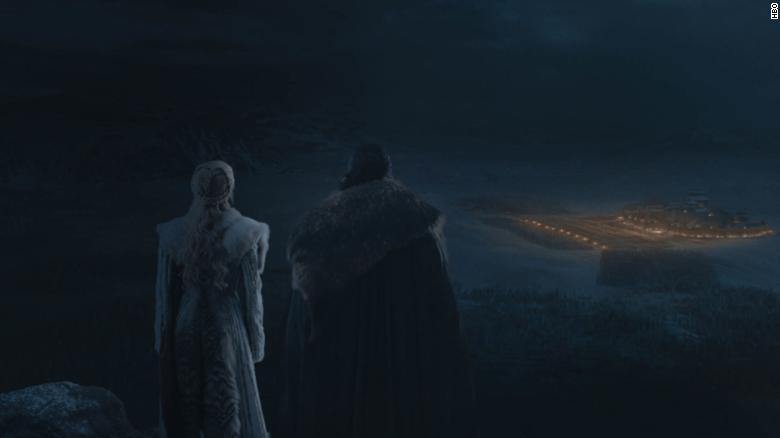 At some point, Jon and Dany realize that dragons are a much more efficient way of taking out maximum wights with minimum effort. However, once aloft, their flying weapons of mass destruction swiftly encounter a new and confusing opponent: clouds, and among them, the Night King, ready to make his dramatic entrance.

With the dragons disconnected from ground control and the Night King bearing down on ground zero, the rest of Winterfell’s forces realize the grave error of their strategy and retreat back into the castle, but not before losing dear Dolorous Edd. Nominative determinism (and an opportunistic wight) finally got the better of him.

What follows is just a bunch of chiaroscuro carnage specifically engineered to make you feel every bad emotion at once: The Army of the Dead breach Winterfell’s fire fortifications. Lyanna Mormont, Lady of Scowls, goes down like a real one at the hands — or rather, in the hands — of a wight giant. Beric dies protecting Arya who is, to put it mildly, FREAKED. OUT. Yes, she said she was looking forward to seeing this face of death, but something tells us she wasn’t expecting quite so many faces. 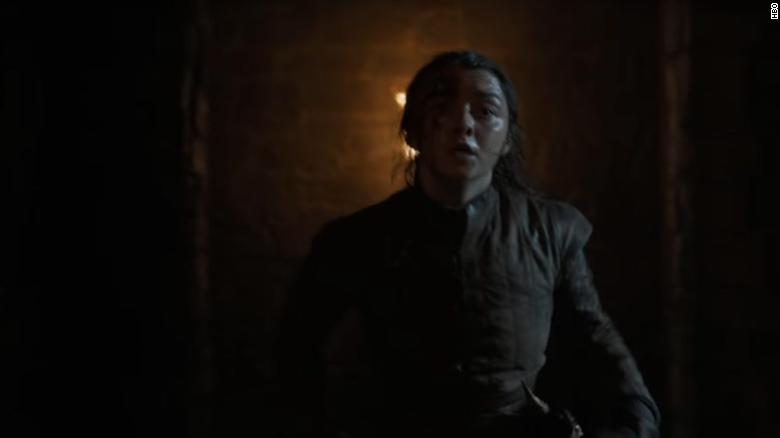 Meanwhile, in the godswood, Theon and the Ironborn stand ready to defend Bran from the approaching Night King. Bran, always grateful that so many are willing to lay down their lives for him even though he’s never super clear on why or to what end, exits the game to go warging in some crows.

However, the Night King’s approach is stalled when Jon, riding Rhaegal, confronts him and the undead Viserion. Watching the two dragons tangle in mid-air under the moonlight is a magical scene, in part because it is actually visible and not shot through ten pairs of gas station sunglasses. Eventually, the Night King bails and a series of extremely creepy, significant stuff happens: First, Dany tries to roast him, literally, but when the flames clear, there he stands. Then, as Jon approaches, Longclaw in hand, he actually smiles. The Night King smiles! Please scrape that image off the top of our brains immediately. 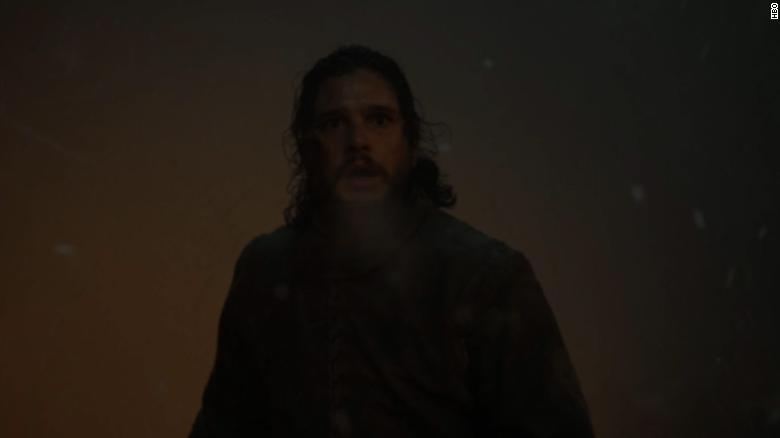 Of course, you’d be smiling too if you were about to raise a brand new army of dead people, which is what the Night King does, “Hardhome” style. This particular move plays poorly for Tyrion, Sansa, Varys, Missandei, Gilly and the group of red shirts hiding in the very safe crypts. You know what crypts have in them? Dead people! And Game of Thrones is not afraid to have those dead people punch through straight stone for the sole purpose of making you wet your pants in shock.

By this point, everything has quite literally gone to hell. The dead are running around chopping up the living. Everything’s on fire. Jorah Mormont dies fighting alongside Dany, and the sight of Drogon curling up next to his dead body has stolen the very last tear your body can produce. The Night King and the White Walkers finally reach the godswood and sweet Theon Leeroy Jenkinses himself into an inevitable death at the Night King’s hands.

It’s here. It’s happening. It’s all terrible. Bran, having returned from his trip on the Crow Flight Simulator, has a significant staredown with his mortal enemy. Do they know what the other is thinking? Do they know how this ends? The Night King reaches for his weapon. Death is here to claim the living. And yet…

Surprise! The Night King doesn’t even get a hand on his piece before Arya’s on him like a cat falling out of a tree. For a brief second, it looks as if he’s going to choke the life out of her, but she pulls a sleight of hand and stabs him with her Valyrian steel dagger.

Poof! The Night King shatters. Poof! So do his guards and his dragon. The dead fall by the thousands. Arya, the Thanos of Winterfell, has saved the day.

As the sun rises on the ravaged castle, there’s still one death left to fulfill. Melisandre, running critically low on lighter fluid, steps out among the bodies into the snow-covered field beyond, removes her magical necklace, and drops dead. Whatever you thought of the Red Woman, she got one thing right: The night was very dark, and very full of terrors.

Why didn’t they keep all of the armies close to or inside of Winterfell and let Dany and Jon mow down a majority of the AotD, saving tens of thousands of lives? Oh, it was cloudy? Excuses, excuses.

Alternatively, why did Bran have to chill in the godswood? He didn’t use weirwood tree magic as far as we know, so they could have done all of this out in an open field instead of putting Winterfell through the undead wringer.

Are Davos and the Hound just going to split custody of Arya Stark? Does she now have two adoptive dads?

Will we ever find out what Melisandre’s magic necklace was all about?

Are the dragons going to eat all of the dead people? Some of that meat’s kinda old…

Are we actually done with the Army of the Dead? That’s it?

Melisandre: “What do we say to the God of Death?”

The last time these two dangerous women saw each other, Melisandre was carting away Arya’s boy Gendry and promising they would meet again. Arya’s no longer the prickly, aggressive little girl she was, and she seems to instantly recognize and appreciate the significance of the Red Woman’s appearance. What strange people. What a satisfying interaction. 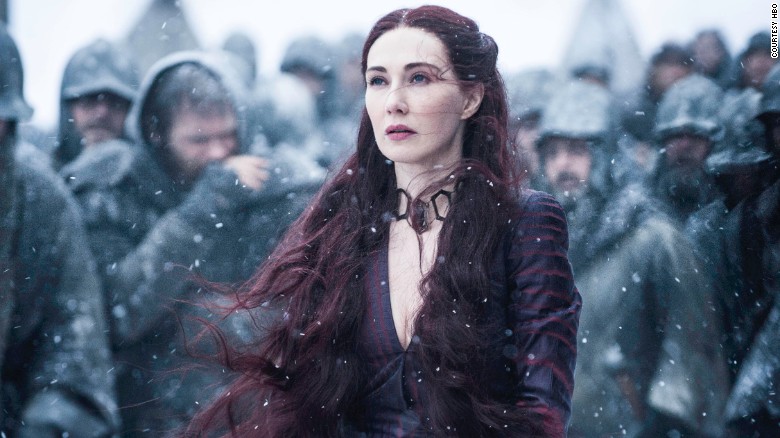 They were all bad. These were all bad scenes and none of them were pleasant. Perhaps the Hound finally overcoming his fear of fire to fight alongside Arya, and Arya felling a wight that was about to attack him. It’s always nice when their murderous tendencies turn out to be mutually beneficial.

7,000 Westerosi knights and infantry (more than half their full number) +

200 assorted other unfortunate people in the crypts and in battle +

Melisandre really leaned in with her final prediction when she repeated her original Season 3 prophecy about which eyes Arya will shut forever: “Brown eyes, green eyes, BLUE EYES. GLOWING BLUE. LIKE, AN UNDEAD EERIE NIGHT-KINGY BLUE. JUST A GUESS.”

Thank the Seven the crypt resurrection scene didn’t include any dead Starks we knew. Our fragile well-beings could not have handled an undead headless Ned.

Here’s the big one guys: Think about the dagger Arya used to off The Night King. It was the dagger used in the initial assassination attempt against Bran in Season 1. The dagger that eventually makes its way to Littlefinger. The dagger Littlefinger returns to Bran, and Bran gifts to Arya in Season 7, Episode 4. It was a weird gift at the time, mostly because Bran is weird. But now, it looks like the dagger’s journey was much more intentional than originally suspected.

We haven’t seen the last of winter — or its soldiers

The Night King and the Army of the Dead are one of the series’ biggest mysteries. You really think they neatly wrapped this up in a bow in one single confrontation? Then what of all of the visions of a Kings Landing covered in snow and ice? What of all of the new tantalizing information about the Night King and his abilities? No, it’s not over…is it? Cnn entertainment

Why Italian Was Right To Call Time On Slowcoaches-Edoardo Molinari