Eliud Kipchoge has become the first athlete to run a marathon in under two hours, beating the mark by 20 seconds.

It will not be recognised as the official marathon world record because it was not in open competition and he used a team of rotating pacemakers.

“Now I’ve done it, I am expecting more people to do it after me.”

1969 Neil Armstrong walks on the moon 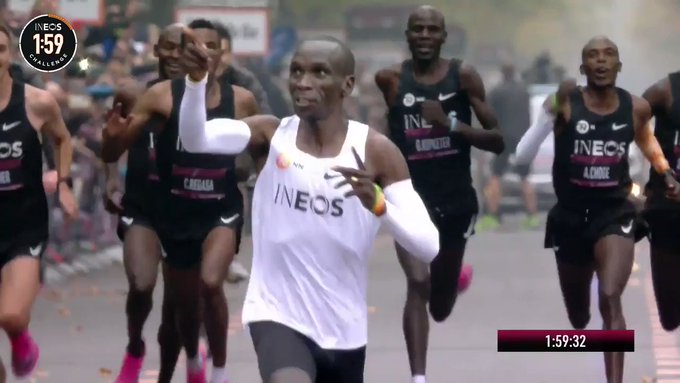 The Olympic champion – who holds the official marathon world record of 2:01:39, set in Berlin, Germany in 2018 – missed out by 25 seconds in a previous attempt at the Italian Grand Prix circuit at Monza in 2017.

Knowing he was about to make history on the home straight, the pacemakers dropped back to let Kipchoge sprint over the line alone, roared on by a large crowd in the Austrian capital.

The four-time London Marathon winner embraced his wife Grace, grabbed a Kenyan flag and was mobbed by his pacemakers, including many of the world’s best middle and long-distance runners.

Kipchoge, who compared the feat to be the first man on the moon in the build-up to the event, said he had made history just as Britain’s Sir Roger Bannister did in running the first sub-four-minute mile in 1954.

“I’m feeling good. After Roger Bannister made history, it took me another 65 years. I’ve tried but I’ve done it,” said the Kenyan.

“This shows the positivity of sport. I want to make it a clean and interesting sport. Together when we run, we can make it a beautiful world.”

With a leading pace car beaming green lasers on to the road to indicate the required pace of 2:50 per kilometre, Kipchoge never went slower than 2:52 for any.

He was 10 seconds ahead of schedule at the halfway mark, before appearing to slow with a few 2:52 kilometres, only to regain the pace and kick on in the final stages.

They rotated in and out, running information around Kipchoge, with former 1500m and 5,000m world champion Bernard Lagat anchoring the final leg.

“They are among the best athletes in the world – so thank you,” added Kipchoge. “I appreciate them for accepting this job. We did this one together.”

Kipchoge’s coaches delivered him water and energy gels by bike over 4.4 laps of a 5.97-mile course in the city’s Prater park, instead of having to pick refreshments up from a table as in normal competition marathons.

These aids are not allowed under the rules of the IAAF, athletics’ world governing body, which is why it will not recognise this feat as the official marathon world record.

The attempt was funded by petrochemicals company Ineos – owned by Britain’s richest man, Sir Jim Ratcliffe – which also sponsors the cycling team of the same name.

The location was selected because of the favourable climate, excellent air quality and almost completely flat terrain, with only 2.4 metres of incline across the route.

At Kipchoge’s request, the course – consisting of two 2.67-mile stretches and two small loops at each end – was lined with spectators, unlike his previous attempt in Nike’s Breaking 2 project in Monza.

Nike also provided Kipchoge with a new model of the shoe that has been worn by athletes running the five fastest marathons in history.

The Ineos team selected the start time of 07:15 BST after assessing weather conditions in Vienna this week.

“That last kilometre where he actually accelerated was superhuman,” said Ratcliffe.

“Everything has to go right to do this. It’s so nice to see the ‘pacers’ be part of this – they are just so full of enthusiasm.”

“He has inspired all of us and shown that we can stretch the limits in our life,” he added.

“For the sport, it is a challenge to other young athletes that they can perform better than they think. For humanity, it shows you can move to another level.

“History has been made. It’s unbelievable.”BBCSports